I have already introduced the recipe for preparing Ankimo/Frogfish Liver (Japanese Foie Gras) in a precedent article as well an article on various presentations.
This posting will show you other possibilities!

The oshizushi/pressed sushi above is a beauty with fish jelly on top! 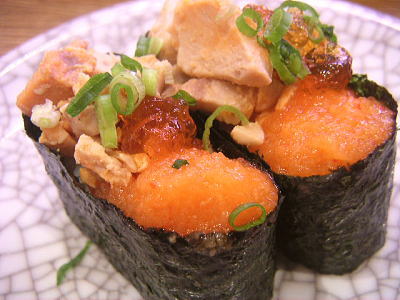 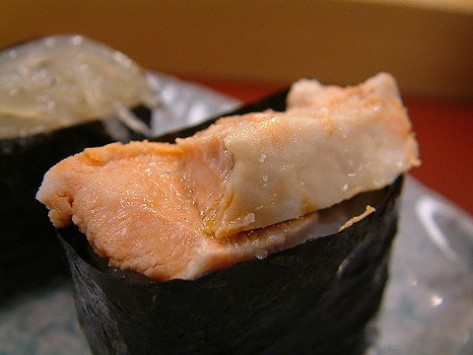 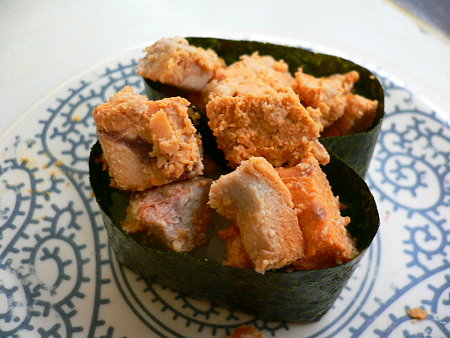 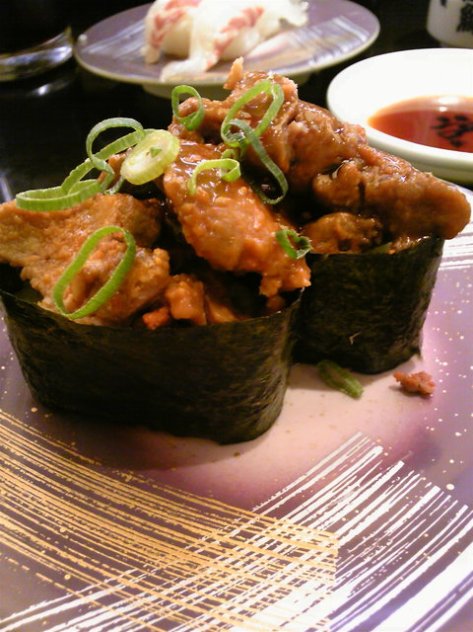 Ankimo does not have to be on sushi.
It can be cooked for its own sake such as in Japanese style above or:

I have already introduced the recipe for preparing Ankimo/Frogfish Liver (Japanese Foie Gras) in a precedent article.

Although there are very few variations possible from the basic recipe, Lindsay at DeLuscious Life will be glad to hear that there exist many ways indeed to present that celebrated Japanese culinary experience:

It could be the very traditional and simple manner of just serving it inside a lacquer bowl:

(Fuji Sushi, Shizuoka City)
Another very traditional way is to present it cut in round slices with ponzu, chopped thin leeks and “momiji oroshi/grated daikon with chili pepper”:

Now, there is a slightly more complicated, if not tradtional fashion to prepare ankimo.
Suehiro Hamanako No Aji in Hamamatsu City cooks the ankimo again (after steaming it) in soy sauce, mirin and sake, and probaly one more secret ingredient, obtaining a great morsel reminiscent of real terrine or pate:

to be served as follows:

Ankimo is rapidly acquiring great popularity abroad, especially in the States where it is served in a traditional but definitely imposing way:

(Courtesy of Chuckeats.com)
or as a totally new gastronomic adventure such as “Ankimo with Plum sauce and Truffles”!

Let’s seee if we can discover more! 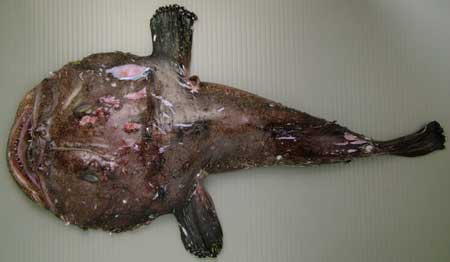 “Ankimo” is the liver of the Frogfish (“anko”), a fish that can be found in most the Northern Hemisphere and elsewhere. Not a nicelooking fish, it is nonetheless appreciated almost everywhere.
The Japanese love it in “nabe” (Japanese-style fish pot au feu), while the French either introduce it in Bouillabaisse, or even better, baked rooled inside prime bacon.

The liver is much appreciated in some countries, especially France and Scandinavia.
In Japan they steam it in sake to make “ankimo”, which I usually introduce to neophytes as “Japanese fish foie gras”!

Pic taken at Yumeshin, Shizuoka City.
I asked for it served (it is a cold appetizer) as it is as “tsumami” (hors d’oeuvre) with “ponzu shoyu”, finely chopped thin leeks and a dash of “Momiji-oroshi” (grated daikon and chili pepper) on a shiso leaf.
It is also great in small pieces on a gunkan topped with the same as above!

As promised, here is the recipe for making “Ankimo”!
Note that sake can be replaced white wine.

Choose fresh ankimo. That is how it should look!

Take off blood vessels. Don’t worry about the nerves.

After taking blood vessels away it does not look pretty. Nothing to worry about actually!

Wrap it in cooking wrap and let rest for an hour.

That is how it will look after an hour.

Take off all water and salt with kitchen paper.
Get the teamer ready.

As in the picture place wrap on bamboo roll maker (use a soft plastic sheet if not available). Place the frogfish liver on third of the way as equally as possible.

Roll in carefully, making sure the wrap sheet does not accidentally penetrate the liver.

Twist both ends of the wrap sheet until there is no space left inside.

Cut extremities of the wrap making sure the roll does not unfold and wrap it inside another sheet.

-Put inside steamer and close.
-Cook for 30 minutes above strong heat
-Take off and let cool

For better consistency leave in refrigerator for a full day. Cut slices to your preferred thickness.

(For example) serve astride sliced cucumber, sprinkle it with a generous amount of ponzu shoyu and place half a spoon of “momiji oroshi” (grated daikon seasoned with chili pepper). Finely chopped thin leeks or shiso would make a nice finishing touch, too!