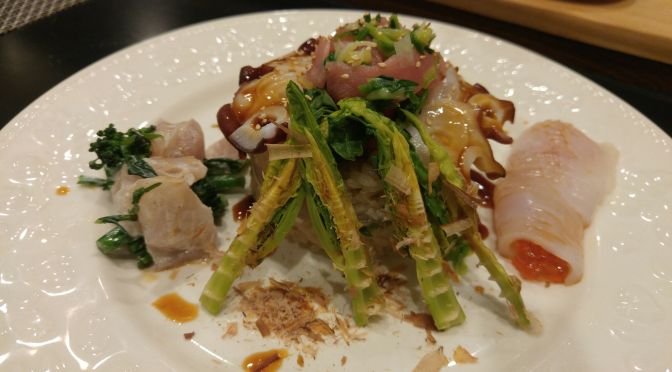 The other day as usual knowing that the place would be full before 6pm I called beforehand at 5 and barely managed to grab two seats at the counter of Sushi Shokujin Birukawa Sushi Restaurant in Shizuoka City!
In spite of its location away from Shizuoka JR Station it is a busy place filled with faithful regulars. Nobody is privileged to their own seats so it is better to reserve or try your luck at opening time! That is unless the plaace is already fully booked!

Anyway, we once again challenged our good friend, chef Kenta Birukawa who moved some 16 years ago to Shizuoka from his native Akita Prefecture to another Sushi Millefeuille! It is not listed on the menu, but if you are recommended in person by your servant he will be happy enough to concoct you an original one according to your taste and priorities!

Kenta’s Akita Prefecture is famous for its wild mountain vegetables and as he had just received some he included them in this millefeuille to call it “AKITA” Sushi Millefeuille!

All kinds of seafood on the top including tuna, seabream, sole and squid! 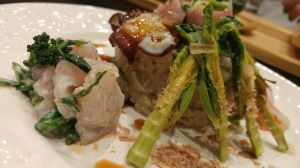 Plenty of fresh vegetables on one half of the sides!
One could easily make such a sushi millefuille a vegetarian one! 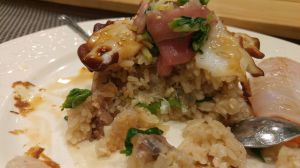 And so much more inside!
Did I mention that there were some more special “decoration side servings”? lol

Can’t wait for the next one!

Chef Kenta Birukawa/尾留川健太親方, as a true chef has always loved to be challenged into new ideas.
Every time I visit his restaurant, Sushi Shokunin Birukawa, in Aoi Ku, Shizuoka City he knows I will asak for a new “Sushi Millefeuille”, a bit to the surprise of regulars as the order is not written anywhere, be it on the regular menu or specialties of the day!

So when I proposed the name, Summer Version Sushi Millefeuille, that is what he came up with!
Note that the sushi rice is lightly colored as 10% of the rice vinegar used in its making is akazu/red vinegar!

The fish served in aburi style/half grilled, half raw on top is “nodoguro” or “blackthroat seaperch” also known as “akamutsu” in Japan, a seasonal fish of higher quality!
The fish was accompanied with “boiled “shako” or squilla!
Anago/grilled conger eel was also included inside the rice with grilled eggplant and thinly sliced cucumber!

Almost a whole dinner by itself1 Looking forward to the next challenge! 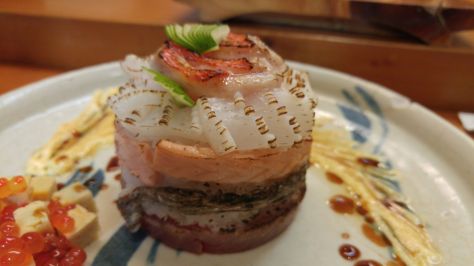 The other day for our first visit at Sushi Ko on Aoba Park Street in Shizuoka City we challenged Chef Kenta Birukawa/尾留川健太さん to create a new Sushi Millefeuille for the Year 2016!
Bear in mind that he only can and may do it and that it does not feature on the menu! 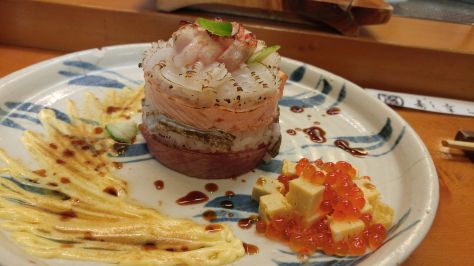 The main part of the millefeuille made of sushi rice was surrounded with thin bands of 1) akami/red lean part of tuna, 2) tachiuo/scabbard or cutlass fish, 3) shake/salmon.

The whole was then seared before being decorated with thinly sliced cucumber and presented with pieces of tamagoyaki/Japanese omelet and ikura/salmon roe! 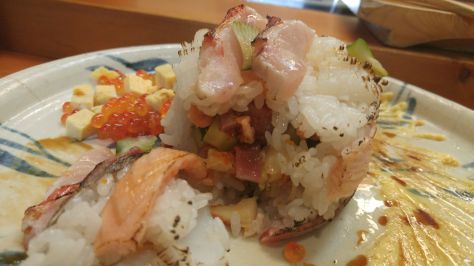 What is going to be the next challenge? LOL