Sawara or Spanish Mackerel is considered as the best kind of Mackerel in Japan. Not only it is a big variety, but its comparatively white flesh is succulent in almost any kind of cooking!

It is known under different names such as Sagoshi and Sagochi when young and Yanagi when mature.
It is basically caught by trawling, but can be fished by line. It is, unlike other mackerels, a pretty solitary fish.

It is caught widely around Japan, off Russia, China and Korea.
The total catch has varied in recent years, but thanks to import, including 21.000 tonnes from China, it has become a feature in season from late Autumn to end of Spring.

In Winter, it is called Kan Sawara/寒鰆 (寒stands for cold, 鰆 stands for Sawara/Spring Fish) and is a sought after morsel. In Shizuoka it is sometimes caught then in Sagara bay, and I can tell you it disappears quickly form the table.

Later in Spring, it is just called Sawara and is leaner. 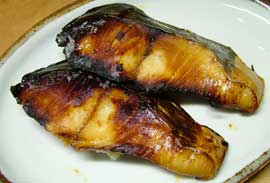 It can be cooked in many ways: broiled as above.