Yesterday, I had the pleasure to introduce a “hidden treasure” to my friends Anselmo and Ticiana Zeri with Ticiana’s moter, Helda, who were on their 6th visit of Japan. Anselmo had found my blogs some time ago as he researched on Japan and had contacted me for more information.
Anselmo then decided it was grand time to visit Shizuoka Prefecture.
It was my pleasure to guide them for two days in and around Shizuoka City.
Yesterday I took them to Ginta, a minuscule Sushi restaurant not far from Yui Harbour famed for its sakura ebi/Cherry shrimps.
To cap it all we are in the middle of the season guaranteeing the best seafood available in this small city. 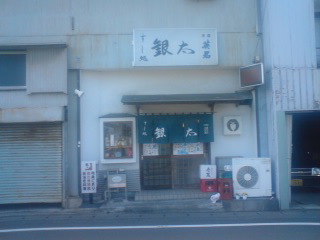 Now, Mr. Hara’s restaurant is unassuming and can be easily missed. But I can guarantee you you do need to reserve if you venture there at lunch as hordes of tourists and businessmen from all corners of Japan make a point tocome just to savour the region’s specialties.

There are indeed many possibilities, and a very good, amost ridiculous prices.
We decided to sample the 3,000 yen sakura ebi full course: 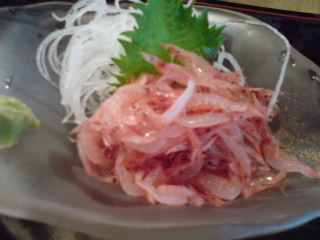 Raw Sakura Ebi, caught in the very morning in Suruga Bay.
Mr. Hara demostrated us how to recognize fresh Sakura Ebi. Take a few between two fingers. They should slip easily away! 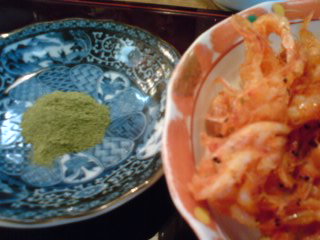 The Kakiage is served with salt and matcha tea mixture. Perfect with tempura! We hust ate them with our fingers!

Actually, once mr. Hara has warmed up to a particular customer, he can become an incredible source of information that even fishmongers at Tsukiji would not be able to equal! I can guarantee you an interesting report next I go there to sample his local fish sushi sets!

Now, what are these Sakura Ebi-shaped things?
This is another specialty of Yui: People there take the long antenna (three times as long as the body) and dry them in the sun after having “shaped them”. These will be used all year long crushed into powder over a bowl of freshly cooked rice!

Since the Missus gotextremely jealous of our little venture, you can expect a report soon!

The Sakuraebi/Sakura Shrimp Spring Fishing Season was officially started two days late because of inclement weather but the first batches were auctioned in the early hours of April 2nd in Yui, the only harbour having the license to do so.
The catch has been good as three times as much as usual was sold, that is a total of 67 tonnes.
Their price went on the average 40,000 yen per case (about 15 kg).
Don’t forget you can sample them directly at Yui Harbour’s food stands!

————————
“Sakura Ebi” or Sakura shrimp is a very small (maximum 5 cm) crustacean caught in the Suruga Bay of Shizuoka Prefecture. Most of ships are anchored in Yui City (will become part of Shizuka City soon) Harbour.

The shrimps are caught in special net baskets according to long traditions before they are put on the market immediately for auction.
Many fishermen open their own sushi restaurants, bars and often their catches of the night until early in the afternoon before taking a well-earned sleep.

For people who prefer them as sushi, the gunkan style is the most appreciated!
Most French and Italian Restaurants in Shizuoka City and around will serve them in quiches!

(pic taken at Togeppo Restaurant/Asty-Shizuoka City Station)
Another popular way to eat them is of course as a tempura called kaki-age, either with fresh sakura ebi in season or dried ones.
Fishermen use to dry their catch for sale and export until the government had the great idea to run an expressway just along the harbour!
The shrimps are now dried along nearby Fujikawa River, creating large quaint rose expanses in the most useen for locations!

In 1965 Yui Fishermen created an Association of their own to decide each year’s toatl catch so as prserve stocks and preserving the environment. A salutary initiative long before normal citizens became aware of conservation and environment!