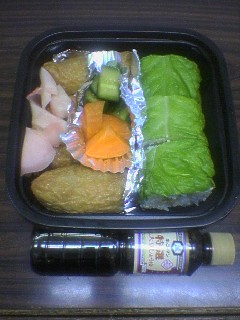 Yesterday (April 23rd, 2007) my better (worse?) half came up with another great simple tasty homemade sushi for my “bento bako” (packed lunch).
After preparing the rice according to traditions, she first made a roll:

Inside is homemade “tamagoyaki” (Japanese omelette) and “kani Kamaboko” (imitation crab made with fish paste/also called “surumi”). Instead of nori, she used large lettuce leaves to wrap it.
Then she prepared “inari”:

“inari” means a ball of rice put inside a pouch made of fried tofu. The tofu itself is quite sweet by Japanese standards. She mixed in some black sesame seeds.

One can of course mix in other ingredients, although one or two are definitely enough. Great for vegetarians!
As for the bento above, she added homemade pickled fresh ginger and vegetables. The small shoyu bottle is for me to keep at work to season my sushi and others! 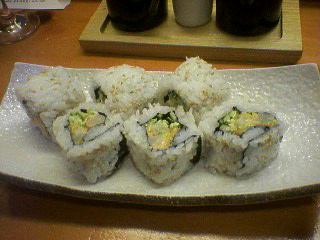 Well, I suppose I finally had to come to it! The truth is that most expats are just crazy for rolls!
Whereas samples in the States in particular tend to become full meals by themselves, I prefer them Japanese-size, affording me plenty of time to savour them!
Here are three samples ( two, actually) That I have recently enjoyed:

The roll above is a “hotate maki” (Scallops roll):
The scallops are first mixed with wasabi mayonnaise and coarsely crushed peanuts before rolled in an “inverted” (seaweed on the inside) and coated with sesame seeds. 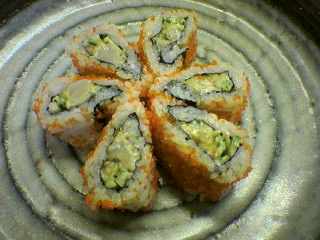 This roll is exactly the same, although the shape in “petals” is typically Japanese. Instead of sesame seeds, it is coated with “Tobiko” (flying fish roe) which apart of their great colour are succulent and crunchy!

Both above rolls were ordered at “Sushi Ko” in Shizuoka City, Aoi Ku, Aoba Koen.

Now this one will please my North American friends!
It was made by my better (worse?) half as part of a “bento” lunch box.
She calls it “tonkatsu maki”, that is, deep-fried (schnitzel-style) soft pork cutlets that she has let cool down first. She then rolled them in sushi rice to which she had added wasabi mayonnaise and sesame seeds before rolling them in lettuce instead of seaweed.
I have to admit it is a favourite of mine!

2 thoughts on “Sushi Rolls/Sushi no Maki”