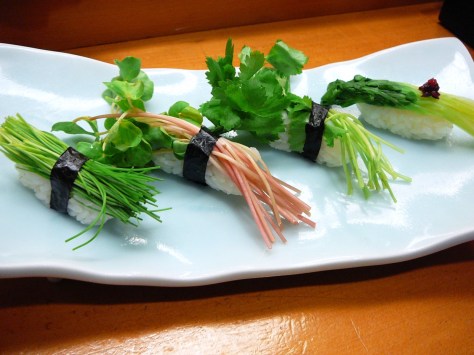 Many questions are asked about sushi as there are many misconceptions, which is absolutely normal if you do not live in Japan.
I hope the following will clear up the skies for everyone.
Naturally, if you have other questions, I’ll be glad to answer them!

Q: Are there “special seats” at a sushi restaurant?

A: The usual misconception is that sitting at the counter automatically proves more costly than sitting at a table or on a tatami floor. The price will vary accordingly to what you have ordered wherever you sit. The fact that customers sitting at tables usually order “sushi sets” will tend to demonstrate that it is cheaper, but you can order the same at the counter. On the other hand, sitting at the counter will entice you to order sushi piece by piece and venture into some exotic requests, hence a higher price. I myself always sit at the counter, especially around the “corner”, because I can enjoy the vital opportunity to converse with the chef, watch his technique and have a good look at the available ingredients of the day.

Q:”Nigiri Zushi” should be eaten at once?

A:Yes, for two reasons:
First, the carefully-made “nigiri zushi/握り寿司” will somehow collapse on itself after some time and will not look so appetizing.
Second, the “neta” will dry up and will lose some flavour, tenderness and freshness. That is why I have always strongly felt gainst the very popular “kaiten sushi/回転寿司” (conveyor belt) restaurants!
The trick is to order one “nigiri zushi” after the other and savour them individually, one more reason to choose a counter seat.

Q: What are the prerequisites for a good “shari” (rice ball part of the sushi)?

A: As rice is actually the most important part, only high-quality rice such as “Akita Komachi” should be used.
I’m sorry to say so, but sushi made with Thai or Basmati rice abroad is not sushi. Full stop.
Next, the balance between the rice vinegar, sugar and salt is very important. Too much of any ingredient will leave an overwhelming taste inside the mouth to the detriment of the other ingredients. Not enough salt will also be detrimental. Only experience will dictate the right amounts! 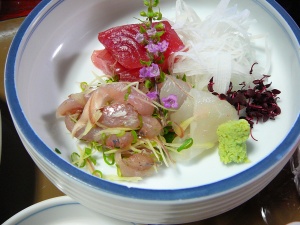 Q: Should you dip the “neta” or “shari” first into the soy sauce?

A: Do as you like!
I myself very often ask the chef to add soy sauce directly onto the sushi!
Actually some sushi don’t need any soy sauce.
One can enjoy sole/hirame/平目with a tiny pinch of salt and some lemon juice on top of the neta, or sakura/raw horsemeat is served with tare, grated ginger and chopped leeks, and so forth.

Q: Is there a definite order in ordering and eating various kinds of sushi?

A: That is widely subject to personal taste. The best way is to finish with your special favourites.
I myself start with tuna sashimi (“akami” variety, my preferred part of the tuna) and finish with “natto/ume/shiso (fermented beans+pickled plum meat+green beefsteak leaf. Mind you, I would not order that in Osaka!) maki” with soup, preferably “kanijiru/蟹汁” (miso and crab soup).
In between I shall order all kinds of “nigiri zushi” according to availability. I also make a point to order “chyawan mushi/茶碗蒸し” (Japanese steamed custard) whenever possible.

A: It should be. If the “gunkan/軍艦” (literally “mother ship”, term taken from the Navy) is properly made! A “gunkan”-style “nigiri zushi” is made with a strip of dry seaweed wrapping the rice ball leaving the top free and securing the topping (“neta”). Ｍoreover I would ask the chef to season it with soy sauce to avoid dropping it into my soy saucer (sorry for the pun!) 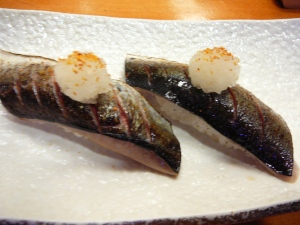 Q: Should all “neta” toppings be made from absolutely fresh fish only?

A: That is another misconception.
Long ago, sushi “neta” were exclusively made of boiled, pickled or salted fish.
As hygiene, refrigeration and preservation have greatly improved, we have access to better and better fresh fish. But in some cases, such as for “maguro” (tuna), it is best to leave the fish rest in a secure place for a while before eating it.
“Maguro” is at its best after a week left in a cold (not frozen) place.
Actually, Mr. Hara, the chef at Ginta in Yui, explained that he gets his fish (of the day only) from the boat the harbour, gut and dress it within a minute before leaving the fish fillets mature on a piece of cloth in the refrigerator for at least half a day! 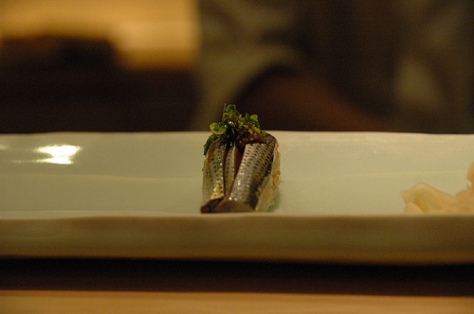 Q:Especially in the case of “kohada” (gizzard shard fish or small sweet sardine) we can see at least 5 ways of cutting and presenting the fish: which is the best one?

A: Well. that probably depends both on the chef’s and the customer’s preferences. With a different cut or presentation, various parts of the fish will offer a different exposure to the eater’s palate with consequent different tastes and flavours. 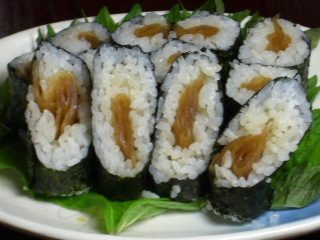 Q: “Kanpyo (dried gourd shavings) maki” is usually cut into 3 pieces and “tekka (tuna) maki” cut in 6. Is there a definite reason for that?

A: No. This is being dictated by two factors:
a) Easy-to-hold or to-eat portions.
b) Sometimes when the “maki” is shared so smaller portions (6) will be more practical and pleasing to the eye.

Q: Which is better, a male fish or a female fish?

A: A male fish, because a female loses part of its own nutrients for egg (roe) production, especially in the case of salmon and white-fleshed fish.