For all my agnosticism, I sometimes think I am blessed to be born in Dijon, Bourgogne, France and lived in Shizuoka City, the birthplace of Wasabi! 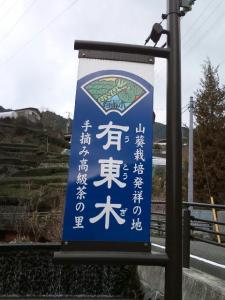 The sign at the entrance of Utogi, the birthplace of wasabi!

Around 1600, farmers in Utougi District, some 33 km from Shizuoka JR Station along the Abe River, first started experimenting with the culture of that particular plant, which they already knew as a wild vegetable used for pickling. At the time they were only processing the stems, leaves and flowers. 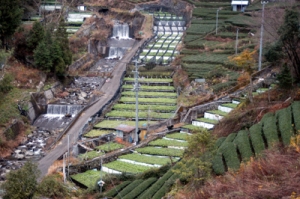 If you want to visit Utogi, where you will find a soba restaurant and other shops as well as the possibility of trekking and festivals watching in April and October, either go by car (55 minutes) or take a bus (Shizuoka JR Station/75 minutes). The trip along the Abe River is worth for its own sake with all the changing landscapes and vistas!
I did it by bicycle, but it took me 5 hours for the return-trip from the city centre and had to push the bicycle along forthe last 3 kilometres. Even a maoutain bike would have made it! 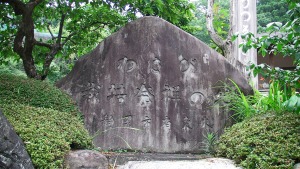 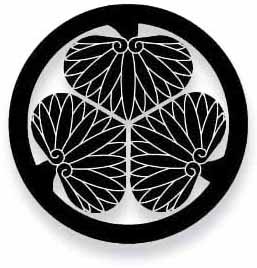 They even have their own “Mon/Arms”!

This is still a very popular kind of pickles in Shizuoka where they are sold in season.
In 1604, Tokugawa Ieyasu, the Japanese Overlord/Shogun, who had just moved to Sumpu (presently Shizuoka City), grew extremely fond of the grated root and helped spread its use all over the country. Its present culture has expanded outside our Prefecture, especially in Nagano, but Shizuoka still produces not only 80% of the whole crop in Japan, and the best wasabi are grown in Utougi and in the Amagi Range in Izu Peninsula.

This gentleman is the 17th generation of the first wasabi growers in Utogi! Check His homepage (Japanese) where you can order a whole array of products! Look at him in his field on youtube! 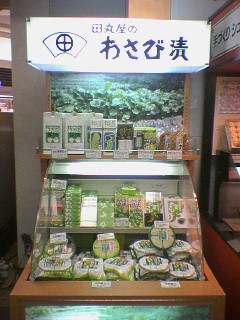 The first and oldest wasabi shop, Tamaruya, is still very much in business in Shizuoka City and even has a stand in Haneda Airport, Shizuoka City!

Wasabi growing is backbreaking work. You need a constant temperature, so you have to be located at a certain altitude (weel over 1,000 metres in some cases) as extreme heat is not welcome, as well as extrem cold. 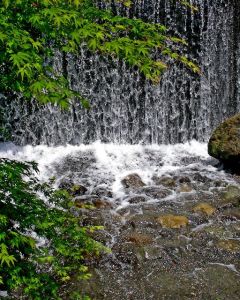 Pure, soft, constant water is a must. Shizuoka water is known as the best in Japan as demonstrated by its superlative (and rare) sake.

Fields need constant care during the two years it takes for roots to be mature. You can drink the water in these fields without any fear!

If you want to grate your own wasabi, you will need a grater.
The best (above) are made with shark skin!
Grated wasabi is the most common use for the plant, especially with sushi and sashimi.

But the stems, leaves and flowers are extensively used.
The leaves can be eaten raw and are great with miso!

The stems are a delicacy marinated in rice vinegar. 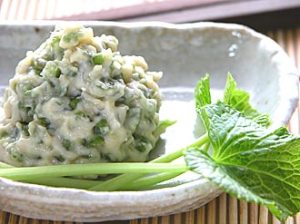 Wasabi zuke/wasabi stems and flowers pickled in sake kasu/sake white lees.
Wasabi zuke in Shizuoka is simply extravagant as the sake breweries sell their best white lees/sake kasu (after the sake has been pressed) to the local farmers and producers!

Soon I will post an interesting home-made recipe for wasabi zuke! 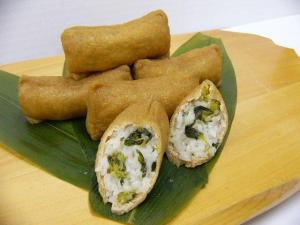 The same leaves, once pickled, can be included inside inari zushi for the pleasure of vegans! 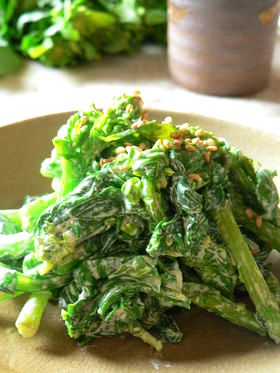 Na no hana/rape flowers boiled and seasoned with wasabi mayonnaise.

Now, you might know it, but thinly sliced wasabi root is not as strong as grated wasabi. In Shizuoka, as it is not that expensive, try and ask your favourite sushi chef to cut it in very thin strips and roll as it is in a “maki”. It’s called “namida maki/tear maki” or “bakudan maki/bomb maki” (the real one, not the buster made with grated wasabi!). A favourite of mine! 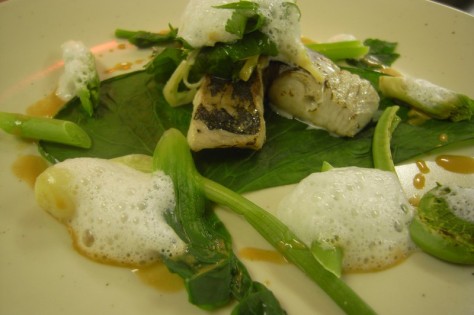 Wasabi is getting more and more popular in French and other cuisines all over the world.
The above dish was created by Dominique Corby a great French Chef who learned his craft at the Tour d’Argent in Paris, among others, before coming to Japan to look after the kitchen of the Sakura Restaurant in the New Otani Hotel in Osaka and of the 6eme Sens in Tokyo.

His cuisine was created with whole wasabi (1 metre long!) i sent him by cool box from Shizuoka.
These are the best grown in Utogi. Very fat, clean, with no black marks and with enormous stems and leaves. Dominique steame the leaves and stems before serving them with fish seasoned with a wasabi sauce reduction from the roots! 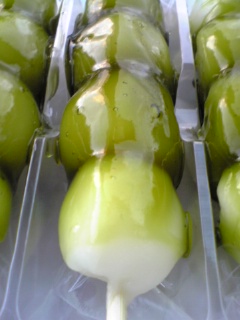 Wasabi comes into many kinds of fancy food for the pleasure of all, young and old!

Wasabi comes into a whole array of derivated products worth exploring:

Wasabi dressing is not that strong and can be used in cold and hot/warm dishes.
The Missus uses it extensively with dtir-fried veetables and meat.

Nori/seaweed and miso seasoned with wasabi is another great vegan seasoning! 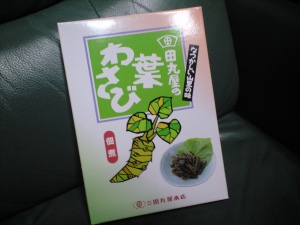 The only true wasabi shochu is made by Bandai Brewery in Shuzenji, Izu peninsula, Shizuoka Prefecture! (don’t be fooled by unscrupulous producers/traders!).

-Wasabi is a natural medicinal herb as it contains big amounts of Potassium, Calcium, Magnesium, Vitamin B2 ad C.

FOR RESIDENTS AND VISITORS IN SHIZUOKA CITY:

On every first Wednesday of the month, a small but very special fair is held in the basement of Isetan Store in Shizuoka City.
It is called “Shizuoka Utsurogi Ichiba” after a group of farmers residing and conducting business up Abe River in Shizuoka City, up to an altitude of 1,500 metres, around Utogi, the birthplace of wasabi, and still considered the best in the world.
Try to come as soon as Isetan opens as it can become quite a unashamed tussle with all these local grannies fighting for the best morsel!
All products on sale are purely local and practically devoid of industrial fertilizers. It is actually a paradise for vegetarians as only vegetables are represented there. A multitude of succulent and extravagant wasabi pickles, pickled plums, onions, etc.
The names, addresses and even phone numbers of the farmers are clearly stated, making all purchases eminently traceable.